The characters Glitch, Wyatt Cain, DG, Raw, and Azkadellia as used in this story come from the Tin Man miniseries.

This story is a deleted scene in Part Two of the Tin Man miniseries. It was written for tm_challenge Round 11A: Things Unseen. 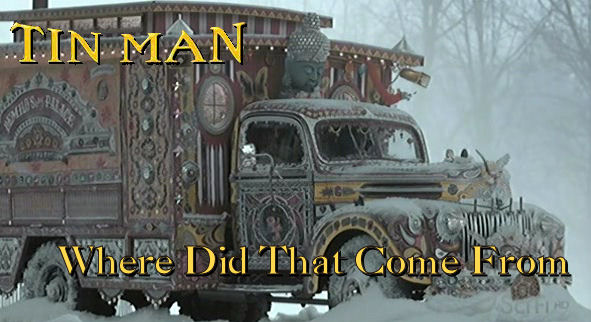 Glitch fed the branch into the tiny stove before surveying the back compartment of the wagon again. Cain was sleeping under all the blankets. The wind wasn't beating as hard against the sides of the wagon now.

DG was gone, taken. Azkadellia said the Slipper had something the Sorceress needed. His finger brushed against the chilly metal of his zipper. They had time before headcasing, hopefully.

But where was Raw? He and Cain were left for dead, DG taken, maybe Raw had hid.

Glitch fastened his battered coat closed the best he could with only two buttons. He would coax Raw out of hiding and then they would wait for Cain to wake up with a plan.

The sunslight danced on the snow, but the clouds were swooping in with the promise of more precipitation. He hugged himself and tucked his hands under his arms. "Raw!" Nothing answered his cry. At least the trail was still broken from his trip carrying Cain back to the wagon.

Longcoats and mobats had swarmed the Northern Palace. Raw wouldn't hide in there, so Glitch waded through the snowdrifts until he came upon another ice-shelled lump rising out of the ground. "If DG was here, she could break it." He sighed. "Wait, DG used Cain's axe."

DG had left it at the front door to the Palace and it was still there. Glitch's energetic swings broke through the ice and splintered the wood underneath before he stopped and opened the door into the outbuilding. "Raw?"

The dim and dusty motor room threw an echo back at him. He sighed, stepped inside, and tripped over an axle rod leaning at an angle between a work bench and the floor. He set down the axe and picked up the rod. His worry for Raw grew. Sure, he was a basketcase, but he had been a big help showing DG how the Queen had saved her so many annuals ago. If the Viewer wasn't hiding.... His fingers drifted along his zipper again.

Glitch ducked through the hole in the ice back into the Great Hall of the Northern Palace. Raw had to be hiding. Longcoats didn't cover every nook and cranny of the building. He strode across the marble floor, carrying the axle rod on his shoulder.

The dim, cold hallways echoed his cry. This was wrong; the light, the temperature, the lack of liveried servants to dodge was all wrong. He pushed open a set of double doors with practiced ease and his mouth dropped open. Light filtered in through the ice shell above the skylight and stories of windows making this cavernous space the best lit room by far.

"DG, Cain, it's my lab! Funny, I thought a busy fellow like me would have more in here." Items were missing judging by the empty pulleys, walls, and tables. Dust sheets had been left over the rest just like upstairs, but someone had pulled them to the floor annuals ago. He caressed a tool box waiting on the nearest table, drawing lines in the dust. "I wish I could remember what I built in here."

He spun around, knocking a chain with the axle rod. "Raw? Why won't you guys come see my lab? It's at least as interesting as DG's old bedroom." He flinched as the synapse fired. DG was taken, Cain was back at the wagon, and Raw was missing.

Maybe Raw had sneaked back to the wagon. Glitch spun around again, picking up the dusty toolbox with his free hand. He remembered to call for Raw all the way back, but there was no answer. He set the axle rod and toolbox down in the snow to open the wagon door.

Cain seemed to be fighting in his sleep. Glitch frowned until he spotted a silver gleam next to Cain's hat. He wrapped the Tin Man's fingers around the gun and the blond man calmed. It was just like giving a pacifier to a baby. He grinned at that while he crouched in front of the stove. He stretched his long fingers in the heat. "We're going to need more firewood, Cain."

(This is where I ended the entry for the challenge because of the word count requirement. What follows is the rest of what I wrote.)

Cain woke up on the wrong side of the wagon after Glitch returned with more firewood. "How far do you think it is to the nearest farm or town?"

"Weren't you the one driving?" Glitch roasted Cain's boot over the stove. "Besides you know the Sorceress went straight to the Tower."

"And how long will it take us to get there on foot?" Cain snatched his boot off the end of Glitch's stick.

He had underestimated the Tin Man's impatience, and he should have expected the man who never stopped hiking wouldn't wait for his boots to dry completely. "So what? You want to steal a couple of horses?"

"Borrow," Cain muttered as he pulled on his boot. "For DG."

But without DG around, Cain returned to his monosyllabic answers for everything. Glitch was only making sure they didn't leave anything they may need later, so why did Cain sound like it was the headcase's fault when the Tin Man tumbled into the snow? "I don't think you're ready to hike to the Tower." Glitch picked up Cain's hat and brushed the snow off of it.

Cain scowled and pulled the toolbox he had tripped on out of the snow. "What's this?"

"And this is an axle rod." He hefted it before looking back at Glitch. "You found this stuff at the Palace?"

Glitch sighed because he remembered explain this before. But Cain had been groggy, clutching the toy with the bullet in it. "I searched the Palace for Raw and didn't find him. You think he ran away."

Cain heaved a sigh as he put his hat back on his head. "Okay, fine. A wizard dropped this stuff out of his balloon for us."

"Why do people say that? It was the Wizard's rule that led to the Emperor Apostle's reign after all." The Tin Man was looking at him and it made him uneasy. "What?"

"Your coat not warm enough?"

Cain pulled a fulcrum and lever from the same compartment he found the axe in. What happened to that axe? "I've spent enough time laying in the snow. Now get to it so we can catch up with DG."