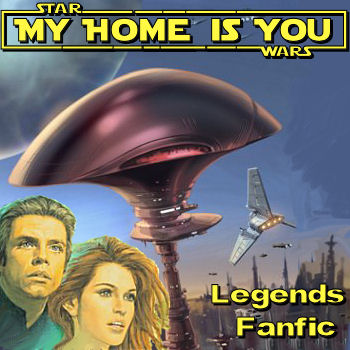 The Corellian Engineering Corporation YT-1760 light freighter moved steadily toward the jet-black Super Star Destroyer. Unlike the Executor's arrowhead silhouette, the Eclipse had a wedge-shaped bow perfect for ramming into anything opposing its might. It was also twice the size of Lord Vader's destroyed flagship. The YT-1760named Jade's Escape according to its transponder codelooked like a grain of sand compared to the Eclipse and didn't fight the locked-on tractor beam.

A battalion of stormtroopers took their positions inside the hangar bay. Two companies lined the walls and the catwalks above, one company took scattered position behind the cover of docked shuttles and other equipment, and the last stood at attention before the platform on which the Jade's Escape would land. The pilot and passengers could not miss the Imperial strength levied against them.

The freighter rose through the hangar bay opening in the bottom of the Eclipse. The stormtroopers split, allowing two pale-skinned human men in civilian clothing to approach the Jade's Escape, and then closed ranks behind them. The one with spiky black hair gestured with his right hand. The YT-1760 spun slowly in the hangar bay until the rear of the freighter faced the troops. The freighter settled on its landing gear as gases hissed. The stormtroopers adjusted their grips on their blaster rifles, but didn't leave position.

The entry ramp lowered. The stormtroopers not in formation took aim at the figures leaving the ship. The first was a pale-skinned human man with blond hair darkening to brown. His clefted chin was held high and his expression calm, despite the binders locking his wrists in front of him. Rumor had it that was the same expression the self-proclaimed Jedi wore when he had disembarked on the second Death Star. And his escort at that time had been Lord Vader, a much more fearsome figure than the woman with red-gold hair holding a blaster pistol at his back and balancing a small, dark-skinned human girl on her left hip. A blue and white astromech droid rolled behind them.

His blue eyes flicked over the hangar bay, probably cataloging every enemy he had present. Her green eyes narrowed at the two Force users at the base of the ramp. She jabbed the blaster into the Jedi's blue tunic to prod him down it. Her clipped icy tone rang throughout the hangar bay. "I am the Emperor's Hand. Luke Skywalker is my prisoner and I will present him alive to the Emperor." They stopped in front of the other Force users. "Am I correct in assuming you are my ride to Byss?"