This is the Library's Card Catalogue, or my list of links. I have more interests than just reading and writing. Now stop laughing, I really do! And since a list of favorite links describe a person without that person realizing it and since users expect to see a list of favorite links on a personal site, here it is! (Feel free to applaud, get out of your chair and dance, or click; whatever you feel is appropriate.) To help you navigate, I have divided the links into different categories: Links to the Library - links for you to use to come back to the Library, Gargoyles - links to sites dealing with the cartoon show, Biker Mice From Mars - links to sites dealing with the cartoon show, TV Shows and Channels - links to sites for my favorite shows or channels I'm almost always watching, Favorites - all the other sites I enjoy peeking at, Comics - webcomics I currently follow, and Friends - sites that my friends have created.

Looking for some fantastic story telling combined with artwork that just keeps getting better and better? Follow webcomics! Most of the ones I'm reading faithfully have been online a few years and you can see how the author and artist have improved.

Clan of the Cats was recommended to me by a friend. An urban fantasy about Chelsea Chattan, a witch who finds herself having to live with a family curse that turns her into a panther, but she just might be the one to break it. She also may be a were-messiah, though that claim is viewed with a lot of disbelief (the most from Chelsea herself).

College Roomies From Hell!!! is the second comic series my friend recommended. Then there was a crossover with Clan of the Cats, and I was doubly hooked. It started off as the story of three college freshmen boys, then got a cast expansion of their neighboring freshman girls. Then the boys got mutated, Margaret was revealed to be an object of desire for Satan, Dave died but came back with Chester, and let's not forget about the blue mushrooms.

I found Fans! when it crossed over with CRFH. One university's science fiction fan club against monsters, aliens, and secret government organizations. Now are they about to face the Lord of Evil?

WLCD The News Chicks is focused on a fictional Oklahoma TV station and three women that work there. I met Raven through her friend Chelsea, and both characters have shown up in the other's strip. But given Bryan M. Richter's update schedule, Jaime Robertson (author/artist of Clan of Cats) uses the News Chicks more.

I discovered Nukees through Clan of Cats "Portal Storm" story line. Chelsea and Raven traveled to Gav's dimension, and I was intrigued by the giant robot ant to read the archives and keep reading.

I found Gene Catlow while scrolling one weekend looking for a new comic. It took three years to wrap up the first story line, and that is impressive. Unfortunately, we lost Albert Temple in 2017.

I started reading It's Walky when it crossed over with Fans. Alien abductees fighting aliens, after it spun off from Roomies. It finished, spun off into Shortpacked, and now Willis is reposting the strips with additional commentary.

Shortpacked is David Willis's spin-off series from It's Walky. You really don't have to know everything that happened in Roomies and It's Walky, but Shortpacked is set in their same universe dealing with the insane people who work in a toy retail store. It has also ended. 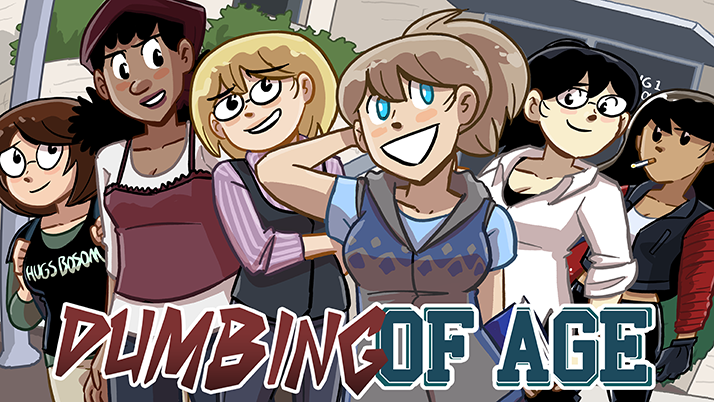 Now if you liked most of Willis' characters and wondered how they would function in a normal-world college AU, Willis has Dumbing of Age that does just that.

Clint Hollingsworth and Jamie Robertson teamed up to create a subscription comic Melpomene, a spin-off of Jaime's Clan of the Cats. I haven't subscribed yet, but decided to check out Clint's other comic, the Wandering Ones, an action-adventure story about the world in 2066 A.D. after the human race nearly went extinct. The main characters are a group of scout apprentices: some from a clan that has adopted Native American ways and some soldiers from the Alliance to learn their secrets.

Obscure Zodiac has the best TMNT fanfiction beside my own, Mutant Ninja Turtles Gaiden. Tigerfog can write and draw! His inspiration is different from mine, but it's still the green shellbacks we love.

Mindmistress crossed-over with Elf Life first, but it was her second or third crossover that made me start reading it rapidly. The art took some getting used to, but the writing and the characters more than makes up for that.

And Shine Heaven Now is a fanfiction comic based off of Hellsing, combining the mangas, the television series, and the OVA series with loads of funny. Really, blood-sucking vampires, fanatical Nazis, and those who hunt them can be funny! This summary DOES NOT do it justice. Seriously, Erin Ptah is the reason I started hunting down the Hellsing mangas. I have a better grasp on the characters and what's going on in the OVA series thanks to her strips. And Erin is the Queen of all crossovers. She has managed to include the characters from Read or Die, A Pup Named Scooby Doo, the Nutcracker, Princess Tutu, Revolutionary Girl Utena, Witch Hunter Robin, Bertie and Jeeves, and L'il Orphan Annie with a few other familiar faces from comic strips. And they all make sense!

Okashina Okashi - Strange Candy Xuanwu is an active member at And Shine Heaven Now's forums and has helped Erin with certain storylines. So I decided to check out the webcomic he writes. A group of mostly all strangers get sucked into a dimension-hopping spell and still haven't found their way home. Various anime troupes are pounced on and exploited.

"Special School is the tale of a government-sanctioned class for super-powered humans, offered as part of the curriculum in a small-town university in upstate New York. The university gets extra funding, the students get course credit and special powers training, the government gets a well-trained, civic-minded generation of super-powered humans with some measure of debt and/or gratitude toward them; everybody's happy. At least, in theory." I can't sum it up better than that.