Mike Engle, Lt. Gerard Stephens, and Barbara "Babs" Gordon were introduced in the Dark Knight, and Molly C. Quinn has been cast in the story to portray Babs. Jessica Hooks was introduced Batman Begins. The characters Richard Daniel, Oswald Cobblepott the Third, Vicky Vale, Renee Montoya, Harvey Bullock, Dr. Leslie Thompkins, Waylon Jones, and Jason Todd originate with DC Comics. Summer Gleeson originated with Batman the Animated Series. Yolanda and Tara Ross originate in The Dark Knight Rises novelization by Greg Cox. Their origins or uses have been adjusted for this story. Also I dropped about a decade from Joseph Gordon Levitt's real age for the sake of my timeline.

The first sixty-five minutes of the Dark Knight Rises happen as on screen before events veer off into this alternate universe. 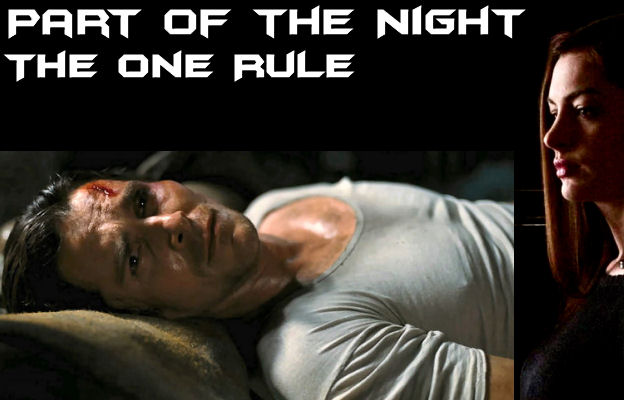 Selina landed on the roof of her apartment building with a grin. Not that the night was anything worth grinning about: Daggett tricked her over the CleanSlate and had muscle willing to kill him to get her head. Then Batman had to swoop in and help her, but she got away clean before the legend himself snapped the cuffs on her. She breathed through her chuckle and headed down the fire escape.

Jen sat on the armchair with only one lamp on in the living room/Selina's bedroom. Selina's good mood bubbled higher since she could tell her about tall, dark, and mysterious right away. She opened the window and slid halfway inside. "You won't believe what happened tonight."

A hand from the shadows grabbed Selina's throat and yanked her into the room. Someone slammed her against the wall. A meaty forearm pressed against her throat and collarbone, and an equally meaty leg and hip pinned her dangling legs against the wall. She didn't recognize the stoic black man holding her up.

Four armed men filled her room: the one who held her, one who aimed a gun at her over the black man's shoulder, one who stood behind the armchair to grab Jen, and one who left the door and walked closer to Selina. He was a Caucasian man with brown hair and a beard. A red scarf wrapped around his throat where the black jacket left it exposed. "Where is Batman?"

His pal eased up so Selina could speak. "I don't know. I ditched him as soon as I could."

"After the way he came to your rescue against us? Is that any way to show your gratitude?"

"What gratitude? My hand still hurts from him knocking the gun out of it."

The smirk didn't reach his cold blue eyes. "You think you are such a clever thief, playing both sides so you always land on your feet. Bane is about to jerk the ground beneath Gotham away and then where will you land?"

Selina took a deep breath. Two more men were with this group, and stood in the tiny kitchen hallway to the main door of the walkup apartment. "I'm not about to apologize for wanting to live. So what deal do you want to make to guarantee that?"

"Why did he save you? You are not one of his good people of Gotham."

She rolled her eyes. "He had questions about the job I pulled at Wayne's." The pressure increased on her throat without the big man in front of her shifting his weight.

His leader continued. "Batman will approach you to find Bane. You will lead him to the tunnels from the O'Brien Street subway station. Refuse and Bane will snap both your necks like twigs." He strolled to the armchair and stood in front of the cowering Jen. He ran his knuckles down her cheek. The blonde woman jerked back from his hand and pressed against the back of the chair. "But only after his soldiers have grown tired of using you whores."

They filed out without an answer from Selina. She glared at them until the outer door shut, and then she rushed to the armchair. "Jen, are you okay?"

"Not your fault." Selina petted her blonde hair. "Batman had to save my ass from them earlier. It'll be okay; I won't let them hurt you."

"By doing what they want." Jen's voice hadn't sounded that lost since she finished therapy.

Selina pushed down her anger at Bane's men. "Since when have I ever given bullies what they want?" She patted Jen's back as Jen clung to her catsuit. "I've got the money from selling Wayne's Lambo." So much for refilling her retirement account with it, but living to retire was more important. "Pack a bag, kiddo. They can't hurt us if they can't find us."