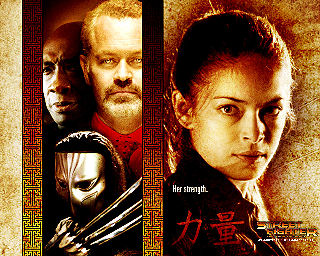 Let me be straight up with two facts: Street Fighter: the Legend of Chun-Li was a bad movie and Neal McDonough was the reason I paid money to see it in the theater. The first Street Fighter movie starring Jean-Claude Van Damme and Raul Julia was campy bad, but fun. The plot and characters make sense within the movie. I've got no problems with using a video game as the source material and changing things as long as it makes internal sense and improves the story (see my Legend of Zelda fanfics for example). The movie becomes fanfiction of the video game, and enjoyable in its own right if done correctly.

So what pulls Street Fighter: the Legend of Chun-Li into the bad fanfiction category? Let me count the ways.

Problem one: YOU KILLED BISON! You put in a cute little ad and a nod to go find Ryu next, but you killed off Bison. You put Charlie Nash in the movie (and yes, someone else had to remind me of the significance of that character) and you let him live and killed off Bison! I haven't decided if I should give out brownie points for making it the most hard-core Neal McDonough on-screen death or not. 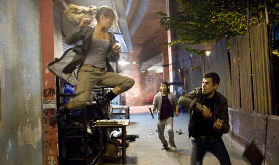 Problem two: I can accept using a video game as the place to get characters and build the story up from there. But with the genre of the game and the movie, your audience is expecting fights. And then when you set up fights between two characters from the video game, we expect to see some major ass-whumping. The Vega/Chun-Li fight is an epic fail in this regard. And the only reason I can't see it getting more time is because of problem number three.

Problem three: The B-plot with Charlie Nash and the Bangkok cop; why the hell was that even in the movie? Seriously, we get cheated on the Vega fight because you need to make a joke about gold handcuffs? All those scenes should have hit the cutting room floor leaving the storage container scene and maybe some of the so unhelpful guns at the end. And Nash should have died. I mean DUDE, you just let a seventeen-year-old girl see her father get killed brutally and didn't even try to turn her aside when you saw what was going to happen!

I totally want Rose to snap and go evil just because of that alone. Either that or Bison invested in cloning research. And Nash should have died.

Problem four: I'm not hating Neal for the Irish accent, he said repeatedly in interviews "they" wanted Bison to have an Irish accent, so he came up with a backstory reason for it. Epic fail on directing there. I figured based on the interview reasons that it was mostly leftover from his parents and then reinforced when he went back to Ireland. Parents died when Bison was infant; any accent should have been Bangkok-ish since he never left until in his late teens or early twenties! Yes, you do pick up local twang (some people more easily than others) but being back in Bangkok should have been bringing that out in his voice.

From Intentionally Left Blank: Fanboy wailing, oh that's what that sound is posted on March 09, 2009.

And I expanded on Problem number three in a thread about the movie at the LiveJournal Community for Neal McDonough fans.

And no offense to Moon, because I thought she did an excellent job with her material, but everything with her and Nash--aside from the heads scene--should have hit the cutting room floor. Asking as a writer, what purpose do those scenes serve? Prove Bison is a bad guy? All the other Bison scenes covered that one thoroughly. Prove Bison was international? Speaking everyone's native tongue at the dinner meeting proved that one. We need to have more guns for storming the compound, so we need to set up these characters. Shipping container scene did that and proved Bison has a sick sense of humor. :p

From Comment thread from Street Fighter entry posted on 28 February 2009.

Now what makes me writing a little dabble to fix canon material so odd is I did it to reverse something seen on screen. I have filled in plot holes, revealed more backstory, expanded characters, and extrapolated their futures, but if someone died in canon, they were dead in my fanfiction.

But Bison's death was such a boneheaded, idiotic, and potentially franchise-killing move, I had to reverse it. Then I read some story details from the Street Fighter games, and learned Bison had tinkered with cloning. So that moved from being a cheat to honoring a detail of the franchise. These 573 words made me feel better about having seen the movie. I hope they made it better for you too.

I finished writing Street Fighter: The Legend of Chun-Li: The Real Ending on March 10, 2009 and posted it on Discipline Under Fire. I finally realized how unfair that was for this little story, and posted it at the Library in September 11, 2012. 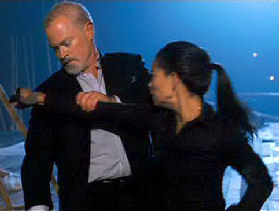