This story was inspired by a Fic Whining Circle challenge for Halloween Star Warsfics. I hesitated because I have tried writing horror and I'm not effective at it. So we eventually had a consensus that a light-hearted story with masks qualified too. Naboo is basically Space Italy and Italy is also home of Carnival, so that and a Chinese festival that honors the dead inspired the Festival of Outcast Spirits. Ahsoka Tano got roped into the plot after I made a list of people Mara and Luke would invite to their wedding in this series and I left her off and no one else noticed. Not only did that pull my plot together, it also allowed me to also work in Ghost Anakin for Halloween. I started writing the story June 22, 2018 and finished it on October 19, 2018.

Yes, I am continuing to borrow the work Fialleril put into color symbolism in her Tatooine Slave Culture.

Acharyan Luke: True to what I hypothesized in the Authors Note on My Home Is You, Luke has started changing the terminology of the New Jedi Order. Since other people had found a sound alike with Padawan in Sanskrit, I started looking there and found Acharya. So I added a n to it to bring it closer to Padawan.

The in universe source of the term was one of the holocrons liberated from Byss had an academic Jedi explaining that the dropping of the term Acharyan was decided by a Jedi Council long ago to fit in better with the Old Republics culture as the Jedis outreach expanded. The term was still in use among the Guardians of the Whills on Jedha until the Empire destroyed the planet.

The Kheraryush: It has always bothered me that the Noghri gave Leia a fancy title but kept saddling Luke with Son of Vader. Language doesnt work that way. So I took a stab at creating a new Honoghran word that means Son of the Savior. Leias still the one the Noghri consider in charge of the Vader clan as well as their second Savior, rescuing them from Imperial slavery. And now Vashalh and the Noghri in Leias employ have something respectful to call Luke and the New Republic representatives and bureaucrats arent constantly reminded of Vader.

To develop Jar Jar Binks Gungan Basic dialogue, I used speak like jar jar binks. Im so thankful for this website because I wasnt finding any other sources for the differences in Gungan Basic and regular Basic.

And the picture below was one of those serendipity finds that crossed my Tumblr dash as this story gelled together. I have no idea who the artist is, but they cemented that in this AU's future Ahsoka I'm-not-a-Jedi Tano will have her master's oldest grandchild as a padawan. 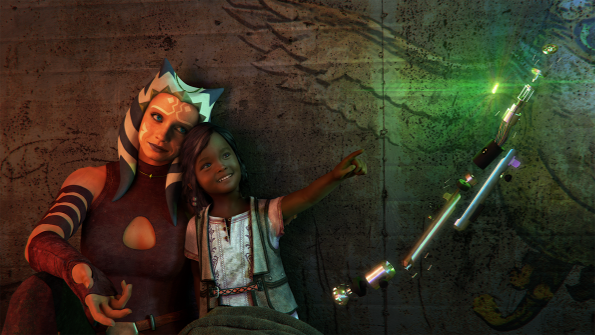 Looking For Home: Forsake No Longer, Outcast No More was published on Ao3 on October 20, 2018 and published on the Library on March 28, 2022. Please enjoy it!