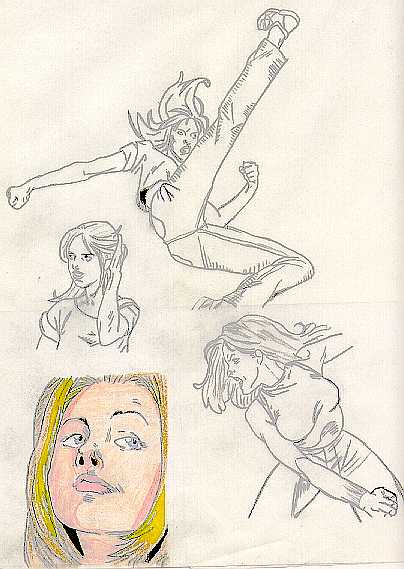 I've received a few comments that these Notes look better with graphics. And I wanted to show a close approximation of my visions of my characters. So I added these drawings of Allie. They are tracings (because I can't draw decent-looking stick figures) based on Sarah Michelle Geller. Why her? If I had to cast my novels as movies, Geller would be my first choice for Allie. Now, on to comments about Ronin.

I didn't abandon Allie after writing Bloodlines. She was growing up with me. I realized that she wouldn't want to stop fighting the Shredder and that the Turtles wouldn't let her. Leo and Donnie think she shouldn't put herself in a position where the Shredder could kill her. Raph doesn't think she is capable of taking on ninjas. Yeah, she's tough but not that tough. So Mike is stuck in the middle, knowing that Allie can fight but also not wanting to see her hurt. Faced with this opposition, no wonder Allie turned to a secret identity.

To improve her fighting skills, she worked with Mike and Keno. Keno remembered these training sessions and suspects that Allie could be the Ronin as soon as he hears about the vigilante. He shares these suspicions with Dan, but not with the Turtles. The boys were getting annoyed with the Turtles' "we're the only ones who can handle the job" attitude, yet they still worried that Allie had taken on too much. Starting college is a big transition and add maintaining a secret identity at the same time is just asking for trouble.

Sammie Yutang was developed from Sammie Elewood. Sammie E. started out in my daydreams based off the Teenage Mutant Ninja Turtles cartoon series. She became a major character in the mysteries I wrote that were supposed to be Allie's adventures away from the Turtles. But when I decided that the Allie from the mysteries was not the same Allie from Turtles, I left Sammie E. and her boyfriend in the mysteries. But Allie still needed a best friend. I kept the name Samantha "Sammie" because I liked it. I decided to make her an Asian-American, and got her new last name from the author of another book. The psychology major came up because Allie is probably the most psychologically scarred character I have. Sammie Y. wants to help Allie and other people, and what better way to do just that. But Sammie Y. and Sammie E. are still a lot alike. They are both bubbly extroverts who hide their brains behind a lot of fast talk, but can't disguise their devotion to their respective best friends.

Zack has grown in between Bloodlines and Ronin. In between the two novels, he jumped to Dragonsworld and Hyrule for eight months (described in the three novel in the To Be a Hero series: Hero Awakens, Hero Born, and Hero Recognized). Then in December 1993, he jumped back to Hyrule (described in Legends of Hyrule: Trials of War), and in October 1994, he jumped to an alternate New York and spent two months with the Gargoyles (described in A Mist of Prophecies: Caught in a Web and Wild as a Swallow's Song). But he always returned to the Turtles New York almost at the same time he left, so the characters there don't realize he is a year older than what he should be.

I have to admit that I haven't figured out Taro's story yet. He was a member of the Foot Clan of Japan. So of course, Lotus and Taro know each other. He came to America with Oroku Nagi but didn't believe it was necessary to kill Allie and Zack, not when it was set up for Zack and Nagi to fight later. Eventually, this attitude caused major problems for him inside the Foot Clan. Allie saved his life, probably when the Technodome emerged and the good guys had to blow it up. Taro swore his life to her since she deemed it worthy enough to save.

Mona Lisa was a character introduced in the cartoon series as a love interest for Raphael. Well in my fanfics, she's still Raph's love interest but she's also a Mutate. The Mutates are a group of humans that have been mutated into a lot of different things. Most of them have banded together to fight the company that mutated them, Val Tech. And that's what Allie was helping with the year she rode with Skulls and the Black Bones motorcycle gang. She was good too, until she was tagged in San Diego. She left the Black Bones so not to add to their danger, was caught by normal cops in San Francisco, and sent back to New York. This was supposed to be about Mona, right? Well, Mona is a part of Snake-eye's cell and Snake-eyes is the only Mutate that knew Allie was hiding out in New York. So the two girls had met before in Snake-eyes' club. Mutates started off as a roleplaying game I'm trying to develop. I decided it would fit into my Teenage Mutant Ninja Turtles fanfic universe, so I added it.

Back to Mona. She's a sharp, caustic wit who can force people to talk about what's bothering them. Which is one of the reasons why she's such a good match for Raph. All the Turtles have deep emotions, but Raph has the hardest time explaining his and usually only expresses his anger and frustration. She also wants to see that others reach their full potential. She realizes that Allie's full potential had been squashed accidentally by the Turtles, and was now in danger of being squashed by Allie's fear of becoming what she hates the most. Also Allie is a hero in Mutate circles, and the cause needs all the working heroes it can get. Which is why Mona left with Allie, the need to help Allie rediscover herself outweighed the budding romance with Raph. Besides, Raph should be willing to wait if he wants something really good to develop.

I started college in 1995, which is also the time setting of the novel. By the end of the school year in 1996, Teenage Mutant Ninja Turtles: The Ronin was finished. After a bit of polishing, it joined its prequel on my web site in December of 1998.