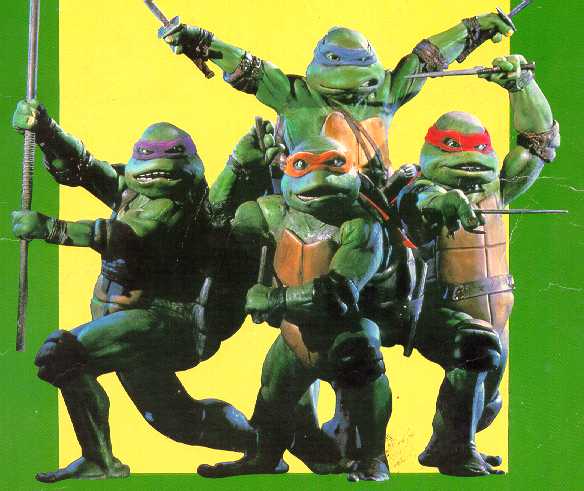 My--okay you can call it an obsession--with the Turtles began with watching the cartoon series. I followed it religiously--even when it got really stupid. I made up my own stories putting myself in their universe.

(Let me explain. When I write fanfics, I usually create a character who I can drape around myself and pretend to be, sort of like role-playing. Cassandra is that character for the Gargoyles universe; Lissa for The Legend of Zelda; Allie Baker for Teenage Mutant Ninja Turtles.)

Bloodlines didn't exactly have a simple development from my daydreams about the cartoons. Allie Baker, her little brother Zack, her friends Sammie Elewood and Pete Fatallin joined the Turtles, April, and Splinter in their fight against the Shredder and Krang. Luckily, the only person I ever told these stories to was myself.

Eventually, Allie, Sammie, Pete, and Zack made their way into a series of mysteries--due to Allie's love of detecting. After writing five in this series, I realized that the Allie in the mysteries wasn't the same Allie in the Teenage Mutant Ninja Turtles universe, which is what I intended. So my detective and her little brother got name changes, and I firmly divided these two universes. Who knew Zack was going to open a different border? But I digress.

1993, I was attending Math Science Upward Bound at Rogers State College in Claremore, Oklahoma and putting the last touches on my third revision of Teenage Mutant Ninja Turtles: The Return of the Foot Clan, when I realized I can't write a screenplay. Screenplays need stuff about camera movements, actors' performances, and other Hollywood stuff I'm clueless about. But I did know how to construct a novel. So I changed my lame title and by 1994, Teenage Mutant Ninja Turtles: Bloodlines's rough draft was finished. I have polished it over the years, and decided in 1998 to put it on my web site.