The characters DG and Wyatt Cain as used in this story come from the Tin Man miniseries. The character Arthur Henry Cain was created for my Tin Man fanfics. Please don't use them in your stories. But feel free to draw them and send me a copy.

This story is set after Prince of the Outer Zone. It was written for tm_challenge Round 9A: Scavenger Hunt. 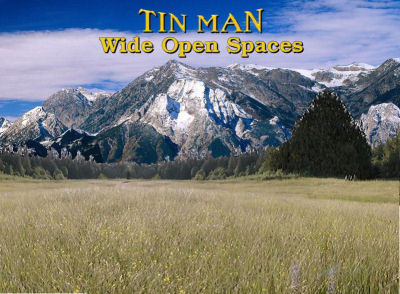 DG parked the bike off the flattened trail through the grass and lifted her goggles. The golden grass swayed in the morning breezes as the suns reached over the Great Kells. Not another soul in sight and she sighed in contentment. She spread the blanket over the grass with Arthur's toys before lifting her nine-month-old son out of the sidecar. Arthur babbled and tugged the goggles on her forehead. She handed them over after she set him down. "Mommy's toys are more fun than yours."

Arthur waved the goggles and then held them over his crystal blue eyes.

"You are styling, Junior, yes you are." She pulled her art supplies out of the bike's saddlebags. "Auntie Az wants a painting of the Great Kells. Today's a good day. Not a cloud around for miles. That's sort of the same as spans." She aimed the time loop projector to record the mountains while she sketched on the canvas.

Arthur pulled a toy drum between his legs and hit it while DG set up the easel and canvas.

"Your grandmother won't let you be a rock star. But if you're ready to go on tour, I won't tell her." She sang the lyrics she remembered from "All-star" by Smash Mouth along with his drumbeat. The soft pencil lines took the shape of the mountains.

He abandoned the drum. She glanced at him, but he just pulled on the grass stalks. "Sorry this is taking so long. But we want it to look good for Auntie Az. Besides, it's better than listening to Baroness Margolotte, right?" Her blue eyes narrowed at the mountains before she focused on the sketch again. She wanted to get where the plains met the trees right. "When Mommy was a little girl on the Other Side, there was an artist with a how-to-paint show on public television. He could paint a mountain in an hour with just a spatula. I tried it once, but I ruined your Grandma Emily's best cake spatula. She wouldn't let me paint for a whole month." DG laughed and glanced at Arthur.

The blanket was empty.

The pencil dropped from her hand as she scanned the golden grass. No dark hair mingled with them. No crushed blades showing where he had crawled. "Arthur!" He didn't cry back. DG had finally proved everyone who said they needed a nanny to raise their son right. "Arthur Henry Cain!" She plunged into the grass, fanning out from the blanket. Arthur was a fast crawler, but this wasn't the smooth floors in Kiamoko. He couldn't have gone far.

Maybe bringing a guard along wasn't a waste of manpower. Sitting on her kid could be added to their job descriptions. And it would make her paranoid Tin Man happy too.

No one had snatched Arthur. She would have noticed someone approaching. But there were animal predators and he could starve wandering the Grasslands because he was too short to be seen. DG inhaled to not cry. "Arthur!" It felt like the wind was snatching his name and flinging it far from her son's ears. "Arthur Henry Cain!"

The prairie remained silent. How the hell was she going to get a search party down here? Arthur was too little to make trouble--regardless of who his parents were. He should have done this when Wyatt was here and could track him down.

"Arthur!" The ground ahead of her dipped away, forming a bowl in the ground. At the bottom was her black-haired son surrounded by blue flowers. "Arthur!"

He looked up with wide eyes. "Mama!" He held a dimpled fist full of flowers in her direction. She hadn't realized how hard her heart was pounding until she saw his smile.

She slid down the grassy sides of the depression that reached up over her head and hugged him. He was fine. Her knees weakened so she sat before she fell. "I never thought putting kids on leashes was a good idea, but Junior, you are making me rethink that."

Arthur jammed the flowers under her nose.

"DG! Where did you go?" She craned her neck. Wyatt reined in his horse and dismounted. His look of relief disappeared into one of concern. "Is Arthur hurt?"

"He's fine. But what are you doing here? I thought they needed you at the tunnel."

Wyatt eased down the side of the depression more gracefully than she had. "Got word that they figured out how to get along and didn't need me. Then Franklin sent a message saying Kiamoko had been invaded by a Baroness who made my wife retreat. So I headed back." Arthur squirmed in DG's hold and she released him. He tottered on his feet straight to his father, holding out the flowers. "Well look at that." Wyatt scooped Arthur into the air, while he shrieked happily.

"I didn't misplace him. He relocated himself." She brushed off her pants as she stood. "Can we go home and shock the Baroness with my motorbike and then leave her out of the family celebration?"

Wyatt made sure she climbed out of the depression first. "Something tells me I'm going to like throwing this one down the mountain," he said with a smirk. 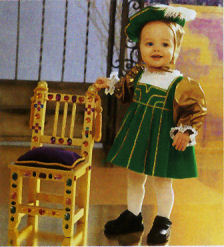