Bruce settled on top of a ten-story building neighboring the taller Eaton House in Wan Chai. Dusk gave him shadows, but he wished a taller building had been available. He set his equipment bag on the concrete roof and checked the signal on his tablet. The pearls were inside the sixteenth-floor apartment facing the building he was on. He stowed the tablet and pulled out the binoculars with a built-in long-range microphone. He tucked the miniature speaker into his ear and trained the binoculars on the sixteenth floor.

Selina sat on the sofa with a laptop. His chest loosened as he watched her. He knew she had survived, had watched the tracker on the pearls move across the world, but he didn't believe it. And this relief still didn't answer the question of how to approach her.

A movement down the building caught his attention. He refocused on a small, black figure climbing the building. The child stopped at Selina's window and knocked. Bruce frowned. Was this what she was doing with her clean slate, training a new generation of thieves?

Selina opened the window. "What did I tell you about showing off? Using the door is sneakier."

"Cut." A little girl's high pitched voice answered. Her English had a Hong Kong accent, but not that pronounced. "Me too slow."

"Chest," the girl answered an unheard question. She peeled off her long-sleeved shirt. Bruce frowned. Her back had triple the amount of scars his did. She pressed the bunched-up shirt to her front. "Yes."

Selina came back carrying towels and some clothing. She spread a towel on the window seat. "I told you not to fight for me."

"No Selina fight." The brown-haired girl sat on the towel. "Me no go to Father."

Selina frowned as she looked at the wound. "It needs stitches." The little girl took a washcloth and pressed it over the wound. "They wanted to take you back to your father?"

"Of course not. Let me get the first aid kit." Bruce moved the binoculars to the bedroom window. Selina pulled a first aid kit out of a dresser and disappeared through a door. He heard water running before she took the supplies into the living room.

"Me." The little girl held out her free hand.

"You're letting me do it. I need the practice." The little girl held herself motionless as Selina doctored her. "How old were you when stitching yourself up lessons started?"

Bruce adjusted the ear piece. Someone taught a six-year-old to suture themselves? She didn't sound much older than that.

"All done." Selina smiled as she packed the kit. "Get cleaned up. I made spaghetti. Ever had spaghetti?"

"No." She pulled on a white long-sleeved T-shirt. Bruce saw her face as she picked up the towels. She was too young to be so scarred. What was Selina caught up in now? The little girl returned to the sofa and turned on the television. Gordon's voice caught him off guard. She watched Gordon explain how the Blackgate prisoners who sided with Bane wouldn't benefit from the parole hearings that were about to start.

The dining room table was on the other side of the room. Bruce leaned back to get it into view. Selina set filled plates on it. "News again? Do you even know what a cartoon is?"

"No catch Scarecrow." The little girl turned off the television and joined Selina. Bruce gave up on the visual and increased the amplification.

"Commissioner Gordon has been catching criminals for a long time. He'll catch him. I feel like a movie tonight. What do you want to watch?" Selina asked.

"No more Jackie Chan. Have you seen Ghostbusters? Okay, we'll watch it then."

The only sounds Bruce heard were forks on the plates until Selina spoke again. "I've worn out Hong Kong's welcome. I should go before those idiots bring the fight here."

A fork hit a plate with a clatter. "Leave? Now?"

"There's more to life than just fighting. When I leave--"

"No, not Gotham, it makes me sad. I haven't decided where, but do you want to leave Hong Kong with me? I know it's only been a couple of weeks--"

The little girl interrupted. "Want me with you?"

"Either you come with me or I make sure your father never touches you again." Selina let out a whoosh of air.

"Okay, we'll get started tomorrow." The two of them cleaned the dishes into a kitchen that was out of his microphone's range. Once it was done, they curled up on the sofa. Selina found the movie with the remote control before leaning back. The little girl pulled Selina's arm around her shoulders. Selina blinked before smiling above the child's head.

The ocean breeze chilled Bruce's exposed skin. She wasn't leaving tonight, so why did the thought of tearing his eyes away spike his chest with pain? She was fine; she was safe for now. He turned off the microphone, and watched the colors from the television screen dance across her face. If he stayed here all night, how effective would he be if she needed help tomorrow?

His nose flared as he shoved the binoculars into the bag. He thought his hotel overlooking the harbor in Wan Chai was close enough when he checked in. He shook his head. Selina would punch him if she knew he doubted her ability to take care of herself. He slung the bag over his shoulder and repelled down the building.

Despite his resolve, he only slept a couple of hours and returned to Selina's new neighborhood when businesses opened for the day. He hid behind aviator sunglasses and the aura of a tourist sampling Hong Kong. 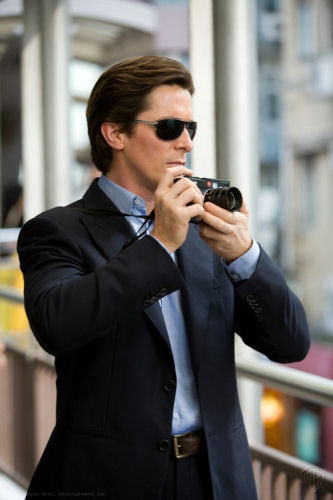 Selina and the little girl exited the Eaton House and headed to the nearest bus station. He entered after them and sat behind their seat. Selina scanned the bus for threats and then settled into talking fashion with the little girl. At least that was his best guess with the background noise and his pretending to be engrossed in his guide book. The little girl gazed on the scenery passing. She nodded and shook her head in response to Selina.

They transferred to the subway line to Sheung Wan. Bruce pretended to forget he needed to transfer also and dashed into the subway car right before it departed. He sank into a seat and used the reflection in the window to watch. He trailed them from a further distance when they exited the subway. The guide book proved useful when they reached Upper Lascar Row, nicknamed Cat Street when it was known as the place that sold stolen items--called rat goods in Cantonese. Those who bought them were called cats, and Selina's smirk at the first shop screamed that she already knew the history. He slipped the guide book into his jacket pocket and shopped.

Selina pointed out a blue silk cheongsam in the little girl's size hanging under the awning of one tiny shop. The child shook her head and fixed her gaze on Bruce four shops down. He stepped inside the tables extending the shop to the edge of its awning and picked up a carved wooden toy. The shopkeeper began his pitch for other items as soon as Bruce moved. He paid for the item he picked up after a glance showed the little girl's attention refocused up the road. Only when the shopkeeper bagged it did he notice that it was a wooden cat. It was carved out of a red-toned wood and had one front paw stretched out to grab onto something.

He hung his camera around his neck and hid behind shooting photographs. Through the viewfinder, he watched Selina and the little girl enter a used book shop that had been built when Cat Street earned its nickname. He lowered the camera and passed it. A white dragon coiled like a cobra was painted on the store's sign: the Ghost Dragons' symbol. He frowned as he looked for an outdoor café within view of the store. Why was Selina getting involved with one of the most notorious criminal organizations in this part of the world?