The first sixty-five minutes of the Dark Knight Rises happen as on screen before events veer off into this alternate universe in the previous story, Part of the Night: The One Rule. 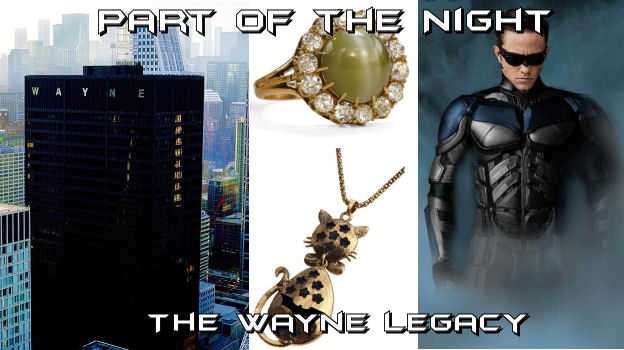 Jim Gordon stared at the Bat as it disappeared behind the skyscrapers. He had noted that Batman appeared when Bruce Wayne returned from the dead nearly a decade ago, but he fell for the playboy antics like the rest of the city, until Wayne protected the police SUV from the desperate man obeying the Joker. Coleman Reese developed amnesia on Batman's identity after that. And then there was Wayne's reaction to Dent and Dawes' deaths.

It was obvious if you looked deep enough, But Gordon decided then he wouldn't pry for the sake of their friendship. And he would hide Batman's identity for their friendship too.

She turned the Tumbler and Nightwing stood in her path. The Tumbler roared as she accelerated. The young vigilante held his ground longer than Gordon would have, but leaped onto the sidewalk when the Tumbler didn't slow or swerve. She maneuvered past the trailer and the Batpod as she went through the intersection and continued down Martin.

Nightwing ran after the Tumbler and stopped near Gordon. His lips curled back. "Right, because what we should do now is separate in half-cocked directions."

Before Gordon could comment, another engine echoed down the street. A red truck that had a gun turret installed in its bed rolled up to them. A young Hispanic woman in a beat officer's filthy uniform climbed out from behind the wheel. "Commissioner, City Hall belongs to the police department."

Gordon nodded before facing Nightwing. "Go after, Catwoman. Make sure we don't have to add her to the casualties list. I'll be at City Hall." Nightwing nodded and sprinted to the Batpod. He waited until the motorcycle sped down Martin Street, and then climbed into the passenger side of the truck. "Do you have a report, Officer?"

"Montoya, sir." She turned the truck and headed to the Narrows Bridge. "I don't have a list of everyone we lost, but I did see Deputy Commissioner Foley gunned down by the female terrorist who took the bomb truck. Is she still at large?"

"No one walked away from that crash." Gordon glanced at the smoke still visible in the rearview mirror. "Foley made a stand after all. How many prisoners do we have?"

"At least twenty when I left to find you, sir. Their ranks broke after the bomb truck left and a lot of the fighters retreated."

Gordon's mustache twitched. They would have to find them before they vanished or caused further harm to the city. "So no one ordered you after me, Montoya?"

Her hands tightened on the steering wheel. "No sir, I figured everyone going after the bomb needed more back-up, especially since Catwoman's pregnant."

"Catwoman's pregnant?" That put a different light on her running off.

Montoya's lips twisted. "Mierda, she hadn't told anyone yet. Please sir, don't let her know I told you. She wasn't sure of the father."

"But she confided in you?"

"I was part of the group sent to rescue the kidnapped Wayne Enterprises executives. Only we got trapped underground and found where Bane had locked up Batman and Catwoman. They hid us from their guard, shared their food, and while Batman healed, Catwoman had morning sickness."

He looked at his distressed officer. "I won't breathe a word. It's Catwoman's news to disclose."

Montoya relaxed a hair when a boom shook the buildings and the truck. "What the hell?" she demanded.

"Batman took the bomb out to the bay when we couldn't stop the explosion." Gordon's vision blurred. He jerked off his glasses and found water droplets on the lenses.

"No autopilot." He swiped his cheeks. "Batman is never coming back."

Fox stared at the frothing water in the manhole. The escape from the emergency flood left him soaked and empty. He knew he should get dry, but the only energy he had left was to cradle his left arm and stare at the water. He heard the whine of the Tumbler, but couldn't turn to face it.

"Mr. Fox?" Selina's voice called out. "Lucius?" Her footsteps hurried across the pavement to him at the edge of the dump.

"They hacked the safety mechanisms. The reactor's flooded." She squatted beside him as he tried to explain. "We can't reattach the core."

A boom from the ocean roared up the East River and swallowed her words. He turned to hear her better, but now she was sobbing. "No," he said as he looked toward the ocean. "Not Bruce."

Selina inhaled and dammed her tears. "Stand up for me, Lucius. We can't stay out here."

He leaned against her as she helped him into the Tumbler. She pulled a blanket from between the seats and tucked it around him. He realized the radio was speaking in Nightwing's voice.

Selina turned the heater on full blast before she picked up the radio microphone. "Shut it, Birdboy. I went to get Fox."

"Yeah, I know what you were thinking and I'm letting it go because you're suffering from emotional trauma. Fox needs medical attention. Where's the closest hospital?"

"Bane closed all the hospitals. Take him to the East Eighteenth Street Clinic, they're still open. Stay there and I'll meet you after I break open the Dungeon. Nightwing out."

Fox felt more awake and the pain in his arm throbbed more as the heat sunk into his skin. "The core went critical?"

"Yes." Selina didn't look up from the controls. "What happened to your arm?"

"I didn't make it all the way up the emergency manhole exit when the water got me. I don't know if it's broken."

"There's the clinic." She stopped the Tumbler in front of a two-story building on Eighteenth Street. She helped him out of the vehicle and kept the blanket wrapped around him.

He knew the woman soothing a crying toddler in the lobby, but his shaken mind didn't give him a name. He knew her when her hair had more blonde than grey and her face was smooth. She recognized him. "Lucius Fox, what happened to you?" The toddler screamed louder.

A young man came through the swinging door to the rest of the building. "I'll get this case, Aunt Leslie." His eyebrows rose when he saw Catwoman. "How can we help you?"

"Mr. Fox hurt his arm when he got wet," she answered.

"This way." Catwoman didn't let go of Fox until she helped him onto an examination table next to an X-ray machine. "I'm Dr. Thorne," the young man said as he looked at Fox's long fingers. "Miss, there's dry clothing stored in the room across the hall."

"It's Catwoman," she said, but left the room as Dr. Thorne helped Fox peel off his wet layers.

The X-ray revealed his arm was fractured, but not completely broken. The doctor had a lightweight cast on the arm by the time Catwoman returned with a sweat suit in his size. He swallowed the pain medication Dr. Thorne offered and the name finally matched the younger version of the face. "Your aunt is Dr. Leslie Thompkins?"

"Good lord, I haven't seen her since the funeral. I had no idea she was still in Gotham."

"Friend of Thomas Wayne." Fox's throat tightened and he looked down at the floor.

Dr. Thorne took the sweatshirt from Catwoman. "Any health services you need?"

The doctor took her flat statement at face value. "We don't have the equipment for that test and I don't know where Gotham General's maternal fetal medicine specialist ended up."

Catwoman turned her head from both men. "Figures. No joy in Gotham today."

Fox studied her figure. She didn't look pregnant, but that depended on trimester. "You and Br--Batman...? He trailed off when her whole body stiffened.

"I'm pregnant," she announced with ice. "One of Bane's Army guarding us raped me after I had consensual sex. That's why I need a paternity test."

Fox looked back at Dr. Thorne who mouthed Batman repeatedly. "Can't you take a blood sample?"

Dr. Thorne shook himself. "We don't have the equipment for chorionic villus sampling, Amniocentesis, or DNA testing. I could take a blood sample, but who in the city is set up to a fetal DNA test right now?"

Catwoman's lips twitched toward a smirk. "What an interesting set of hobbies you have, Mr. Fox."

He adjusted the sleeve around his cast. "We'll need a DNA sample from the alleged fathers."

"I have hair from the guard." She pulled a plastic wrapper out of a compartment on her belt.

"I'll get a sample container." Thorne hurried out of the X-ray room.

"I couldn't. He had the whole city to worry about. I couldn't."

"I understand." He hoped a piece of Bruce was left, mothered by this remarkable woman Bruce had found, and that would be good news for her.