Pirates of the Nonestic was supposed to be a stand-alone novel. But then I got the crossover idea that became Tin Man/Alice: Making Whole. Next came the Scavenger Hunt theme of tm_challenge Round 9A, and I got inspired for this story. I was also inspired by an adventure in the Little House on the Prairie book By the Shores of Silver Lake. I have no idea if it ever made it to the television show.

I thought about keeping this story out of the Library until after I finished Tin Man: Prince of the Outer Zone, but after two years and not getting to write the novel sequel, I decided to go ahead and post it. Tin Man: Wide Open Spaces was added on October 12, 2012, and then posted to FanFiction.net soon after.

The story didn't place in the challenge, but the soundtrack I made for the miniseries won second place.

01. "Cant Take It In" - Imogen Heap / DG wakes in the O.Z.
Can't close my eyes
They're wide awake
Every hair on my body
has got a thing for this place

03. "Street of Dreams" - Rainbow / meeting the Mystic Man
There you stood a distant memory
So good like we never parted
Said to myself I knew you'd set me free
And here we are right back where we started

04. "Wunderkind" - Alanis Morissette / DG learns she's a Princess
I am a wunderkind
And I live the envelope pushed far enough to believe this
I am a princess on the way to my throne
Destined to serve, destined to roam

06. "Out of My Mind"  Duran Duran / Glitch's flashback
Here it comes now sure as silence follows rain
The taste of you upon my lips the fingers in my brain
And be gentle as it kills me where I lay who am I to resist
Who are you to fail

07. "Back to a Reason Part II"  Trans-Siberian Orchestra / Cain looking for Jeb
Somewhere in the dark
Beyond all the cold
There is a child
Thats part of my soul

08. "Roses Fade" - Luscious Jackson / the Cave
I watched your roses fade away
the wings came off your back today--
And I saw all the truth behind
the pretty pictures in my mind--

09. "I Still Remember"  Blackmores Night / Ahamo and DG's balloon ride
Do you ever think of me
And get lost in the memory
When you do, I hope you smile
And hold that memory a while...

10. "Im On My Way"  Rich Price / rescuing DG from the tomb
Could you raise your voice up
Feeling that hope
Together with mine, yeah
But I'm on my way

11. "Real World" - Queensryche / Battle of the Eclipse
What went wrong, what was right
Looking back, I never was there for you
You didn't say, but I know it's true
I can't find the real world alone

12. "Where Are We Going From Here"  Blackmores Night / Reunion and end credits
On a long road, miles to go
Its winding and cold and its covered with snow
But I ask you what we all want to know
Where are we going from here... 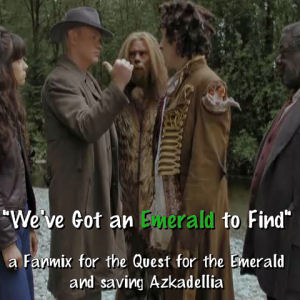 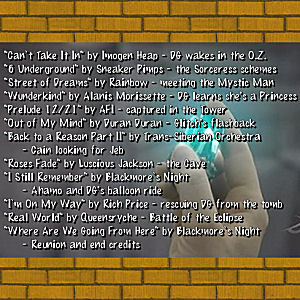