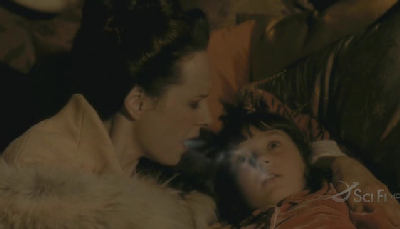 In Chapter Eighteen of Tin Man: Dragons and Ninjas, I got the idea to do something cute. The miniseries flashbacks all had young DG dressed in reds and pinks while adult DG wore blue in homage to the original Dorothy Gale. When I realized she wore a pink velvet dress when she was killed by Azkadellia and brought back to life by the Queen and she also had reoccurring nightmares of what had happened in the O.Z., I thought giving her a loathing of the color pink made perfect sense. It worked also to show how Ichiro missed the mark on getting details about DG right and how Cain didn't. And because the young Princess DG was always in pinks and reds, I had a vague idea in the back of my mind that the seamstresses went back to that color palette for the event Cain refers to as the Victory Ball. That was a subtle attempt at showing that Galinda and Ahamo weren't reaching their youngest daughter and she was finding a rock for proper Princess behavior in Cain of all people since she wanted to impress him.

So when tm_challenge Round 12A: Honored rolled around, I wanted to show DG's reaction to her nightmare dress and showcase the military dress uniforms again. Only two people submitted stories for the challenge, so the moderates forwent voting for a winner.

I finally posted the story at the Library on October 13, 2012 and to FanFiction.Net shortly after that.