I finally settled on Biker Mice From Mars: Wars Are Won By Those Who Dare: Turbo as my entry into National Novel Writing Month 2008. Happily, I did win by finishing the first draft on November 30th--even if I did cause myself some issues with another deadline: my first attempt at the M.A. Exam Part 2. I neglected to get my reading materials and then tried to cram reading them on November 30th while writing. Needless to say, I flunked my exam on Dec. 2nd. So I ended up sitting on Turbo for a while as I finished both parts of my M.A. Exam. I finished the second draft by November 8, 2009, finished the third draft, and posted the story on July 26, 2010.

You can read about my month-long adventures with writing the first draft, here at Discipline Under Fire. I learned a lot about my writing habits and what I need to change as I work at better integrating writing with my life. I learned that my average hourly word count is 1133. That’s not a bad daily word count to shoot for with everything else I have to do.

I can usually make an hour of writing in the morning if I take care of myself (i.e. go to bed on time and don’t drink too much caffeine). But my best composing comes from longhand writing in notebooks that I worked on all day long. That may just be my perception, but I feel that my hour at the computer is better and I get more done when all the thinking is done in longhand.

Favorite lines from the metrics I kept while writing the first draft.

Now, be honest, how many of you readers noticed the detail with Throttle's eyes? That I actually worked in on purpose, where the name of Sparks' bike is pure accident. I swear to all the gods, Sparks’s name for his bike was inspired by his line in Reunions when Throttle grabs him. Which would be why it dawned on me when I checked my spelling that father and son have both equated motorcycles with horses.

Another question I wanted to ask because I didn't have room for in the narrative to expand on the idea; how many of you guys caught that the vindictive asshole is right over parents and Throttle and Charley's relationship? Charley has a lot in common with Tamara that the flashbacks should make pretty clear, but I don't know if the parallels between Throttle and Chuck Davidson are that obvious. Pete is keeping track, though.

Chuck married a woman who got pregnant for a marriage and gave up the life he preferred. He raised his daughter after his wife left them. He was close enough to his biker buddies to name them his daughter's godfathers. He cared about helping others, which resulted in forming the Riders of Mercy. He died trying to stop a crime.

But Charley is so not going to the thought "I ended up with a guy just like my father," especially not after Turbo brought it up.

I love all the flashbacks of proto-Biker Mice. Nearly all the characters have flashbacks to events on Mars in Turbo, but there was one scene that came to me while I was finishing Modo's flashback scene of the first time the Biker Mice have to save the day. Since I couldn't fit it into the story, so you get it here.

Stoker reads the newspaper report about this rescue as he’s waiting to get called up for the Twelve-Mile Crater Jump. He chuckles, “Those kids are going to be the ones to look out for on the circuits in a few years.” He puts the paper aside as the signal for the competition goes off.

Well, the joke’s on Stoker. In two years from that moment, he forms the Freedom Fighters to fight the Plutarkians and a year after that, those kids are taking his orders. 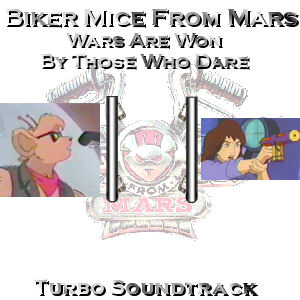 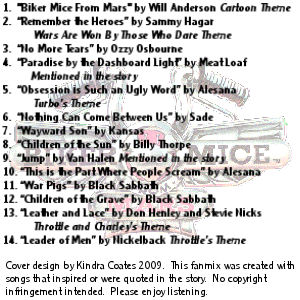