While I was working on Shatter Your Illusions, I debated with myself whether Throttle's nervous breakdown and Charley's sexual healing warranted a separate story. I could just refer to it in flashbacks. Then I read some of the more sexually-explicit stories written by other fanfic writers. So I decided to try it once Shatter Your Illusions was finished. And then I heard "Bent" by Matchbox 20. I knew this song fit Throttle's frame of mind perfectly, so I decided to break my rule on songs for this story.

Oh, my rule on songs? The story is set in 1995, so my rule is to only use songs available in 1995. Nice touch? Thank you, I thought so. But it is where I ran into a problem. The radio station wouldn't replay "Bent" so I could tape it once I decided to use it. And Shatter Your Illusions was nearing completion. So I decided to start Reunions. I got "Bent" on tape, thanks to my friend Kelly, and decided to use "Wasted Time" by the Eagles and "Hurt" by Nine Inch Nails.

Once Reunions was finished, I quickly finished writing Put Me Back Together on November 23, 2000. I sent it on to my beta readers Kat and Morning.

Morning is responsible for the PG-13 version. She wanted a story she could share with her son. She pointed out that I could stay with Throttle's point-of-view during Charley's near rape rather than just yanking the scene out. And she suggested that the sex on the bike could be replaced with a kiss. My friends Billy and his wife Misty helped me cut out the explicit descriptions to leave things implied.

Kat caught the typos that four other readers missed. And she pointed out areas where I needed to spell out characters' motivations. Both these gals deserve a round of applause. They are very good at the beta reading.

Billy--a computer science major--had a good suggestion. "Why not set it up where your readers can download the songs you use in your stories?" I'll let you know if I work something out. 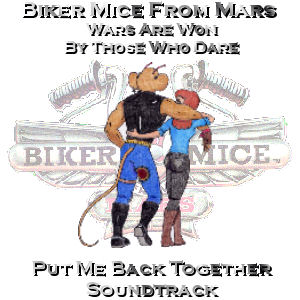 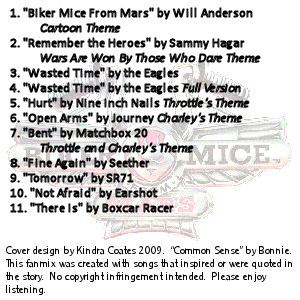