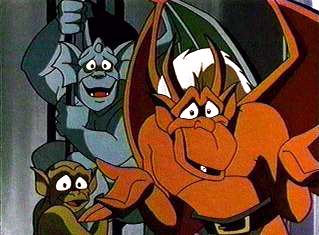 Yes, this title is also from Agamemnon by Aeschylus. Yes, I am starting a theme with the titles of my Gargoyles fanfics. The title of the series--A Mist of Prophecies--comes from the same play. I decided on naming the series after I finished the third story in the series in July 1999, and realized that there are a few more stories in this series.

Shivers the Heart to Hear was started during my Fall 1998 semester at Northwestern State University after A Storm of Things Foreseen was well received. Angela needed a magical snafu, since everyone else that has learned magic in the Gargoyles universe has had one (Alexander in Gargoyles: Equality, Fox in Gargoyles: The Sorcerer's Apprentice, and Demona in Dark Ages: Dreadnought all written for The Gargoyles Saga). I finished it February 20, 1999, the Saturday before Gargoyles: Lethe was shown on The Gargoyles Saga. I guess I wasn't the only one who thought Angela was due for a set back.