Shatter Your Illusions started off as a much shorter story called Jack-of-all-Trades in 1994, back when Biker Mice From Mars was still on the air. In Jack, I introduced the character Tala who delivered the news to the Biker Mice that Carbine was dead. She ferried them to Mars, helped them solve Carbine's murder, and brought them back to Earth. And Vinnie fell for her hard. I finished the story and its sequel, Reunions, for my own amusement. No one else in my circle of high school friends was interested in the show, and I usually only gave out my stories to people I wouldn't have to explain detail to.

Fast forward to the year 2000. Surfing the Net one day, I stumbled across The Unofficial Biker Mice From Mars Fan Club's site. Hurray! I wasn't the only gal in love with the furry trio! And it seemed like everyone had tried their hand at Biker Mice fanfics. I was inspired (that's putting it mildly). I had planned to put Jack-of-all-Trades and Reunions on my website eventually, but now I knew there were people who would read them. I pulled out Jack and made a face; the six-years-old story needed a lot of help. Major overhaul work.

But all in all, it was a fast rewrite. Some scenes survived intact--like Vinnie rescuing Tala from GreasePit--and some scenes came out of the blue. I changed the title; threw out the idea of killing off Carbine; threw in some more of Tala's mysterious past; added Stoker, Zekpith, and Bola; stirred in a soundtrack; and was pleasantly surprised at the result. I finished writing Biker Mice From Mars: Shatter Your Illusions on July 14, 2000 and uploaded it to my website on July 28, 2000. Fast work, so if you notice any major oopsies let me know.

Why Shatter Your Illusions as the the title? Jack-of-all-Trades no longer appealed to me and it didn't fit the expanded story. So I went scouring through song lyrics, a tactic I use when I'm stuck for a title. And when I remember what song I pulled the title from, I'll tell you. 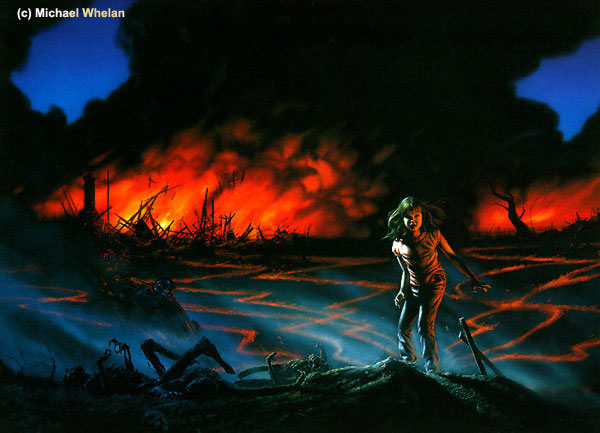 The picture to the side? I like to illustrate my Author's Notes since I can't illustrate my stories. But "Firestarter" by Michael Whelan has nothing to do with the story? Check again, it's the picture Vinnie sees in Tala's bedroom aboard More Hot Stuff that disturbs him slightly.

More stories are coming, so cool your jets. I've got about fifteen planned in my head and I'm currently working on the rewrite of Biker Mice From Mars: Reunions. 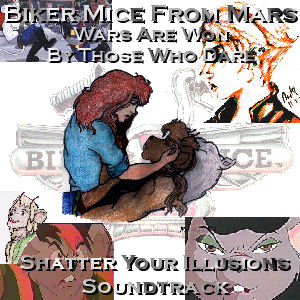 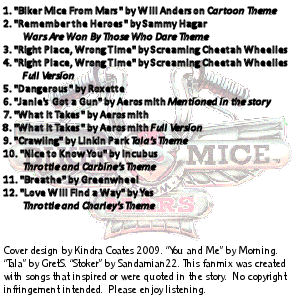