Biker Mice From Mars: Reunions was the first Biker Mice fanfic I wrote back in 1994. I realized it was the second in sequence and then wrote its prequel, Jack-of-all-Trades to introduce Tala.

Fast forward to 2000. Having just complete the Jack-of-all-Trades rewrite that became Shatter Your Illusions, I still wasn't ready to end my Biker Mice writing kick (I was also in the middle of a summer class for Spanish and the furry trio was keeping me sane). I had the second story, Put Me Back Together, all planned out but a problem developed. The radio station wouldn't play Matchbox Twenty's "Bent" so I could tape it and get the lyrics. I had to have that song for the story.

Not a problem. I'll just do the Reunions--now the third story in my series--rewrite next. So I got started. The essential plot didn't change: Limburger sending the bros and Charley to an asteroid mining/refugee spaceship that Throttle's half-mouse cousin Hot Rod is now the Captain of; Roddie and her husband raising Modo and Stella's son Sparks; Charley and Throttle realizing they're in love with each other; and the insane mouse in charge of the Internal Security forces, Colonel Exhaust, threatens the ship along with some slavers.

I ditched the slavers and expanded everything else. A few characters got name changes--Roddie's husband became Lance--and I added a lot more faces to the Olympian Fury--like Axle, Clutch, and Ivero. Vinnie and the readers learn a bit more about the mysterious mercenary Tala. I like giving that information out in the smallest possible bits. And the readers learn a little bit more about the Biker Mice's lives pre-Charley--especially Throttle's. More revelations are in store, so don't think you know everything yet.

I would like to thank Morning and Kat for being my beta readers on this story. They are the ones responsible for a good portion of its final form. Morning, in particular, pointed out I should say something about Throttle's blindness since I have him running around for a good portion of the story without his field specs. Kat had so many suggestions I can't list them all here.

I finished writing it on October 8, 2000. On December 16, 2000, Biker Mice From Mars: Reunions moved onto my website. And as usual if you notice any typos or oopsies, please let me know. 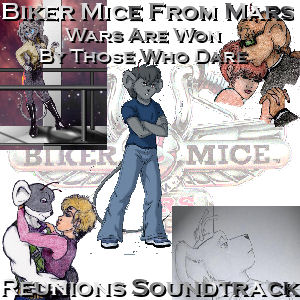 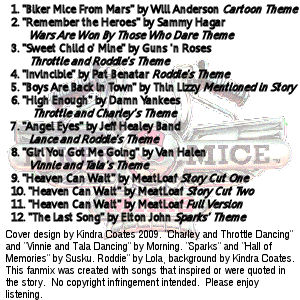