The Gathering is what the official Gargoyles conventions are named. Hmm, actually I'm not sure if they are official, but 2003 is the seventh annual. 2001's Gathering was held in Los Angeles, California and had the first writing contest. One of the categories was titled "Pucking Around;" write a fanfiction staring one of Oberon's Children while they were among the mortals for a thousand years before the Gathering. 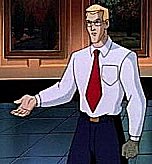 I had already brought up Bridget in A Mist of Prophecies: Shivers the Heart to Hear. The wraith took her form and completely unnerved Owen. But I left the why a mystery. I figured I would eventually go back to explain her connection. Why not now for the contest? But how to tie it into the current story line I have developed? Then I had the brainwave, what if Bridget's death was one of the reasons Puck chose to emulate Preston Vogel when he created Owen Burnett.

I finished the story and sent it off for the contest. Happily, it won second place. Unfortunately, I couldn't go to the 2001 Gathering to accept my prize, but they mailed me the ribbon. Here it is, to the right.

I was very slow on adding this story to the Library. Moving the site, revamping it, and writing on the Biker Mice From Mars/Teenage Mutant Ninja Turtles crossover novel got in the way. But I finally put up A Mist of Prophecies: Regrets November 24, 2002.