This story had three germinating ideas. The first and probably most important was this light bulb moment explained in my blog entry Discipline Under Fire: Random Tin Man thought

Yeah, this came to me in the shower last night and then trying to finish Faulkner paper and watch Castle at the same time got to me and I just now remembered it while trying to do math.

We all assume Cain's nightmare was what really happened to Adora (extra footage of it in the DVD extras aside). What did we see? One empty iron suit (not tin, people! It's based off the iron maidens) and one Adora Cain grave site lacking grass cover. Cain says "Jeb" when he realizes the suit is empty but let's chalk that one up to Cain machismo. Hell, he may have even said to Jeb "you're the man of the house if anything happens me" etc. What do Longcoats do to manly men who don't stop fighting? Lock them in a suit.

So later after Jeb has said Zero killed Adora, after seeing Jeb has his own suit with his camp (and that must have made packing in a hurry a bitch. I hope it came in handy with interrogation sessions.), Cain has a nightmare of finding a time loop projection of Adora's death. Not even her real death, a projection of it! *Pause to snuggle issues!Cain*

Okay, so now that we've established that we interpret these two scenes through Cain's macho POV, here comes the question that popped into my head. What if Adora was the one in the suit?

I think this explains Jeb's attachment to iron suits even more. He was off doing resistance stuff, hears reports of Zero in the area of their new cabin, rushes home, opens the suit and Adora is dead. Or dies shortly after getting her out. *Pauses to snuggle issues!Jeb*

The second germinating idea was listening to “Diamonds and Rust” by Blackmore’s Night and realizing that this song was probably the closest to a perfect theme I would ever find for Adora. So much so, the title is from the lyrics, and I referenced it again at the end of the story.

The third germinating idea was the crap my graphics program was putting me through as I tried to finish the modern O.Z. map. There’s nothing like lack of sleep and whining at the computer to please stop thinking about what you asked it to do and just DO IT to put you in the angst.

What Memories Can Bring was written as a prequel to Tin Man: Pirates of the Nonestic, but it could be considered valid history for Tin Man: Dragons and Ninjas as well. Now there’s two question I’m sure everyone has: what is Jeb and Miriam’s relationship? And how much of this does Cain ever find out?

Jeb and his medic girlfriend is probably the third favorite pairing in the Tin Man fandom. What I find amusing is her hair color changes. Two women are shown in Jeb’s Resistance cell: a red-head who fights with them to capture Zero and a brunette who takes charge of the wounded men they carry back to camp. Miriam is the brunette. Since it is so popular and I came up with the Cain curse, Miriam and Jeb are just friends. Getting the crap beaten out of him when he was just ten drove the point in better than any lecture of how vulnerable children are when their family is in the Resistance. Adora’s death cemented Jeb’s reluctance towards romance.

How much does Cain ever find out about what happened to Jeb and Adora while he was in the iron suit? For starters, Adora never told Jeb she slept with Zero to free Cain, even though she told him what Zero had told her. And I owe Gatechic a big thank you for planting that lie in my head. Jeb also verified the lie from another Longcoat source. Child of a Tin Man and raised in the Resistance, Jeb has an overdeveloped sense of distrust. Unlike Cain, he’s better at turning it off.

Eventually, Jeb will share details of their lives without Cain, like how Adora led a cell in Central City and some of his exploits against the Longcoats. But both of them don’t talk about the suits by unspoken agreement. Cain thinks Jeb spent time in one and Jeb doesn’t want his father to know how Zero tortured Adora. Especially since Zero got a taste of it himself and is currently being punished. Cain is functioning and happy with DG. Jeb isn’t going to spoil that, not after getting to know DG and seeing how much she cares about his father.

I finished writing Tin Man: What Memories Can Bring on June 4, 2009. Since most of the readers I know that like Tin Man frequent FanFiction.Net, I posted the story there first on July 13, 2009. On March 20, 2010, I moved it onto my website. And as usual if you notice any typos or oopsies, please let me know.

Since I could only find nine songs to fit Making Whole and I usually don't bother with a soundtrack unless I get ten songs together, I included the theme song for Tin Man: What Memories Can Bring. This way readers can hear it without the pesky restrictions my website host decided to put me under. 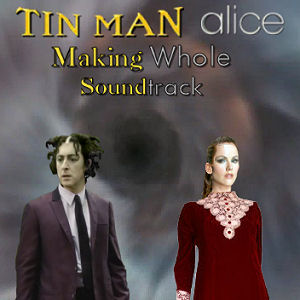 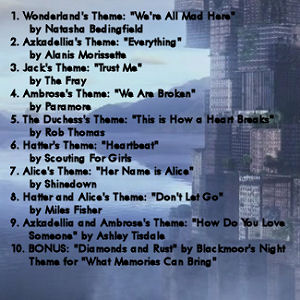