This story was written for tm_challenge Round 7: One-Hit Wonder back on February 8, 2010. It is a deleted scene in Part Three of the Tin Man miniseries, inspired by the image of the two other women in the window with Airofday. The other inspiration was to add another nail in Zero's hubris coffin. In my fanon, he added the time-loop projection for Cain's viewing pleasure to hurt Cain more. It gave Cain something to focus on and not get lost in the madness of the suit instead. Zero continued to hound Adora and Jeb, and that led to Jeb taking command of his resistant cell. Zero couldn't resist telling Cain his family was still alive, and the corrosion on Cain's heart started to flake away. Zero decided it was better not to pay Airofday the bounty money and that led to getting captured by Jeb's resistance cell.

So remember, always pay the people who do something for you expecting payment. Especially if you're a bad guy. 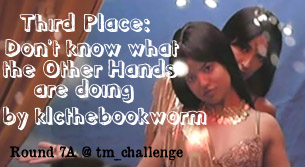