Before Selina Kyle was rebooted in 2001 by Ed Brubaker and artist Darwyn Cooke, her moral code didn't include killing. So I was a little disappointed that the Nolans decided to ignore that bit of history in the Dark Knight Rises, and that took the form of a what if. What if Selina had refused to lead Batman to Bane's trap because it would kill him? And what if Bruce hired her to work with him to protect her?

I plotted it out and tried to set it aside to work on other projects. My maternal grandmother's health took a turn for the worse, and I started writing out the narrative as a distraction. The first sixty-five minutes of the movie happen as shown on screen before my canon-divergent alternate universe picks up. Once I reached the Bane breaking the Bat scene, I stopped because rewatching that scene to get it right was too hard to face at the time. But hey, it got me to work on the projects I thought I should have been working on at the time.

It sat until BatCat Week (http://batcatweek.tumblr.com/) offered prompts for July 21 - 27. I wanted to submit the Dark Knight Rises: Weapon of the Shadows, but I couldn't reach the end in time. What else did I have? I typed up the prologue and chapter one and submitted them for the Day 4: AU prompt.

Response was quick and they wanted the rest of the story. My answer was to publish a work-in-progress for the first time ever. What a learning experience it was too. Besides the fact that there is no way to catch all the typos, my schedule was thrown off for the fun things I like to include like a title image and soundtrack. I didn't like writing under such pressure to keep the buffer ahead and it wrecked my outline and I never could figure out how to handle chapter cuts. I had planned an earlier scene from Father Reilly's point of view to show the Occupation from his perspective, but I scrapped it when I couldn't come up with what made his perspective different. Then I had a brainwave from misguided Tony when I was writing Chapter Twenty-Two. We don't see children in the Dungeon scenes, because even mobs balk when it comes to hurting children who haven't done anything. So they don't round up the children when they snatch their parents. What happens to the children? Tony tells Father Reilly, and he's been squeezing them into St. Swithin's. So that went down on my list of why I won't post a work-in-progress again. If I wasn't posting, I could go back and add the scene and the readers would have no idea how late it occurred to me. It's harder than I want to even think about to fix it while posting and wreck all the reader's flow at the time.

But the reader commentary did help shape the story. I still felt uneasy about Chapter Ten; how it can be read that I'm depending on rape to make things worse for our heroes when I posted it. But there was no way sending Bruce and a healthy Selina to the Pit worked with what else is going on. I was writing Chapter Fifteen and Sixteen when I posted and the readers' responses clarified Selina's response to Barsad in their second fight in the cage. 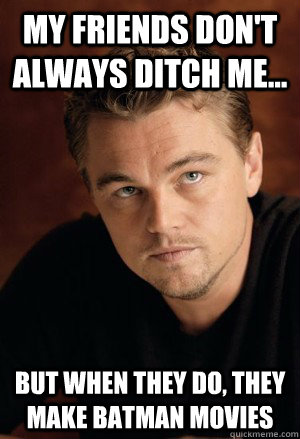 Casting the original characters was fun. While the image to the left isn't the actual one that inspired me (that was Inception hotel window screaming Leo captioned "I want to be in the Batman trilogy too!" and I can't find it now with all the no-Oscar Leo memes), it does point out how everyone else from Inception but Ellen Page ended up in the Dark Knight Rises. So I made it happen. You're welcome, Leo. Richard Daniel is the name of a bank official, a minor character, from the Long Halloween. The names I gave original characters come from either the DC universe or A Tale of Two Cities.

I'm not a Rachel hater, but there is one scene between her and Bruce that always makes me grit my teeth and want to tear it to shreds: the slap in Batman Begins. And honestly, I could give her the slap if they hadn't given her the line "Your father would be ashamed of you." WTF?! Rachel is the same age as Bruce; she knows Thomas Wayne even less well than Bruce does. That line TOTALLY belonged to the character the Nolanverse movies left out: Dr. Leslie Thompkins. So here's my version portrayed by the same actress who did her voice in the Batman: the Animated Series, Diana Muldaur.

Matthew Thorne is the name the Crime Doctor, one of Batman's lesser known villains, and if they don't like me naming the funny doctor from the film after a villain, they should have named him.

The trick Bruce learned in India featured in the "Working Through Pain" segment of Batman: Gotham Knight. The animated movie was produced by Bruce Timm and Emma Thomas, and the six interlocking stories were written by David Goyer, Josh Olson, and Alan Burnett and is set in the year between Batman Begins and the Dark Knight. Each segment is directed by a different anime director and Kevin Conroy voices Bruce, so it may give you a slight disconnect if you followed the Batman Animated Series as hard as I did. Anyway, Gotham Knight is canon in my Nolanverse, and I thought this chapter was a perfect place to call back to it. The India trip falls before he joins up with the Bhutan gang of criminals and gets imprisoned.

I had a lot of fun fixing little details along with the major one (Selina's not a killer). Did anyone else notice that the only orphans in Gotham are boys in TDKR? St. Swithin's being gender-separate didn't bother me as much as only boys entering the Martha and Thomas Wayne Home for Children at the end. So Father Reilly's been gathering the children the Occupation has made orphans of no matter what their gender, and there are girls on the bus now.

Another point, I took most of the names for Gotham City streets and bridges from the Nokia maps. In the movie, Blake names the street the cement truck was on as Castle Street, but it wasn't on the map so I changed it. Sutter Bridge on the map I've relabeled at Gotham Bridge, since that was the name of the one left unexploded by Bane.

And I love the title of Mike Engle's book; hope you guys do too.

The story expanded into two novels, so I'm not surprised that my fanmix soundtrack needed to be broken into two as well. Here's the fanmix for the One Rule. Download, enjoy, and let me know what you think of it. 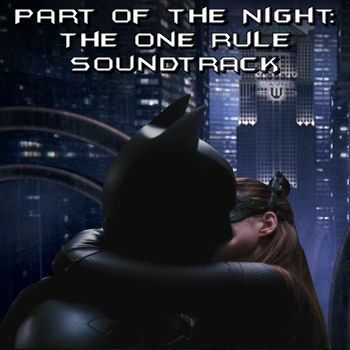 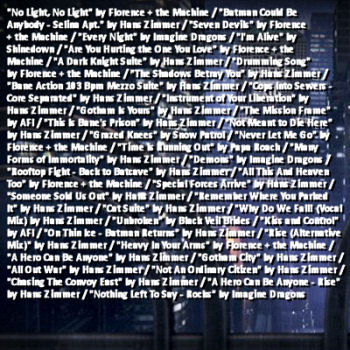